Last weekend I went to the Southampton University Science and Engineering Day.

This is a picture of my haul! Look how much I did and the stuff I got to take home. 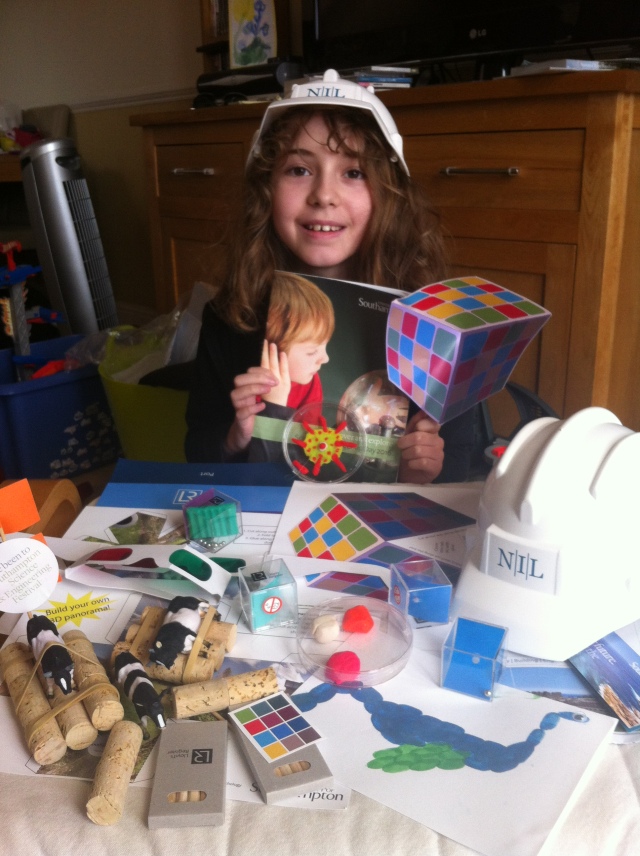 It was held in many of the university’s buildings and we went into lots of them. First, we went into one that was all about noise and sound.

My brother liked the Lego town and trains.

I listened to the sounds that the train made as it went along, through some headphones.

This lady was showing me an experiment about Friction and Different Materials. I chose two materials to put on the racetracks. Then the cat and the mouse on their little sledges were put on the racetracks and were released down the track. The mouse went quicker down the smooth polished surface than the cat which was on the foam. This shows that the foam had more friction than the smooth marble.

Another lady looked inside my brother’s ear and found potatoes growing!

Then we went into Ian B. Dunne’s Magic Science – Science Magic show. We were shown that science wasn’t a form of magic or sorcery. This show was my favourite part of the day! It was really funny.

He did lots of fun experiments. He played music on a saw. 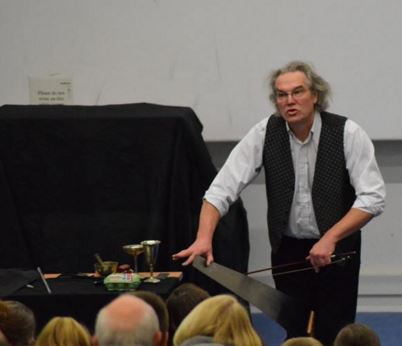 He made his head explode! 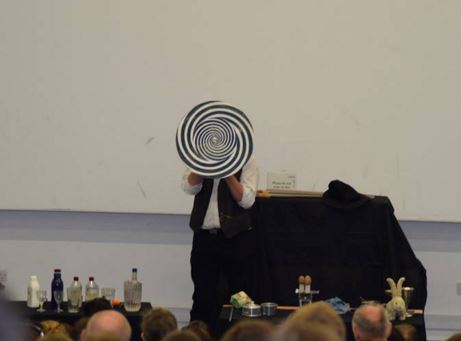 Apparently he also goes to schools to do his show. I wish he would come to mine!

After this show, I had to rush off with Daddy to the other university building and we went on the university bus. I went to a talk called ‘So you want to be a Marine Biologist?’ and I was the youngest person in the room! The talk was really good. The man told us ways to get involved with marine biology even if you don’t fancy it as a career.

Afterwards, my brother and my Mummy found us and we made finger print dinosaurs. I made a pleiosaur and my brother made a pterodactyl. 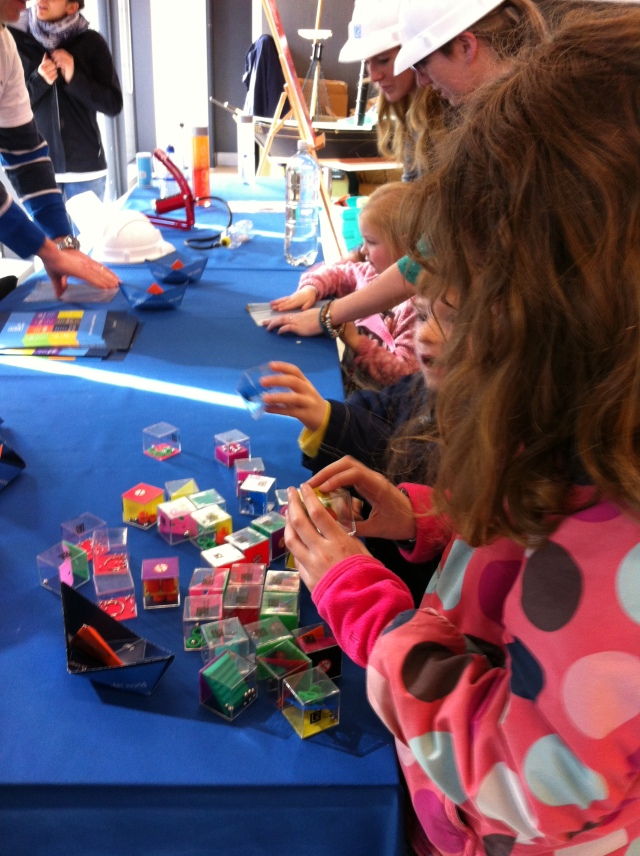 We experimented with ball-bearing puzzles and got to take some home.

We then left there and on the way to another building we met a dalek! 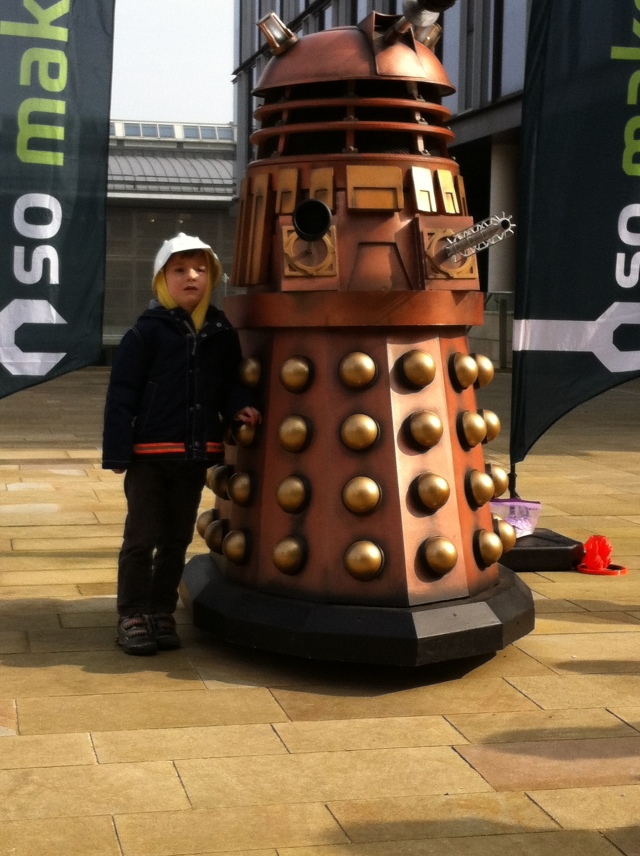 And little robots that wouldn’t bump into things because of their sensors. 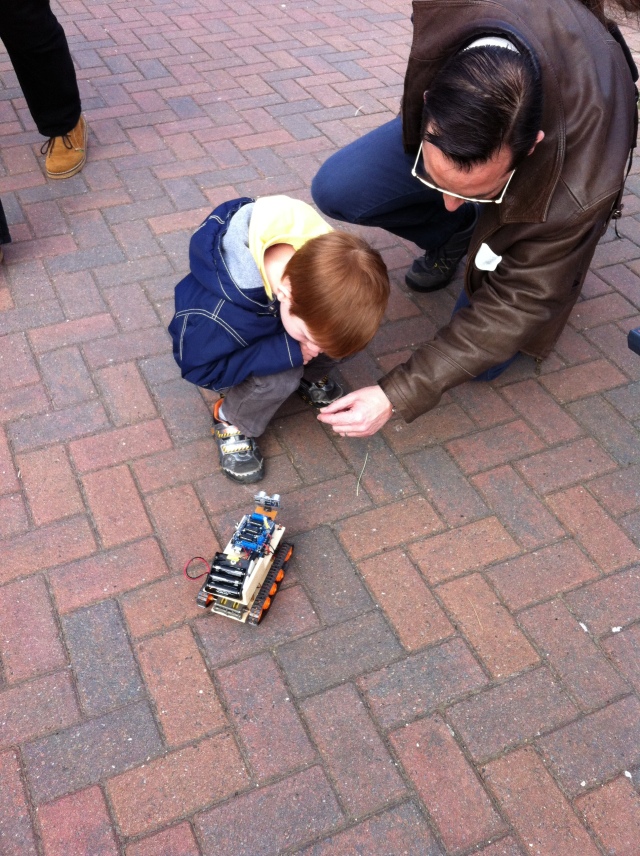 The next building we went into was all about human biology.

My brother spent a lot of time playing with the marble run that resembled different types of cells in the human body being created. He most liked to make the cells die!

I went into the dark room with Daddy. I thought it was scary at first but the scientists inside were very friendly! Inside I learnt about infra-red, luminescence and phosphorescence.

We looked through micro-scopes and 3-D glasses.

I made a mouse brain cell out of play dough.

Then we went to the Archaeological Site and learnt about bronze and stone age tools. We got hard hats to wear to do digging.

I made a raft out of corks and had to try to get my cow across the pond.

After this we went home as we were exhausted. We were there for almost 6 hours!!

Make sure you go next year as I will DEFINITELY  be going!

This site uses Akismet to reduce spam. Learn how your comment data is processed.